In this modern era many people who have smoking addiction are smoking cigarettes even when they know that it can damage their health. But also the number of places (such as shopping malls, workplaces, stores and theaters) which have forbidden the smoking has increased. Also there are many government entities which are making laws to ban smoking in some public places such as restaurants and bars. You need to quit this negative habit and to start living your life in healthy way. When you smoke cigarette, then the nicotine is absorbed in your bloodstream in a very quick way. When the nicotine enters in your body, then it needs ten seconds to reach your brain. This is causing your brain to release adrenaline which is giving you a buzz of energy and pleasure. But you have noticed that this buzz feeling fades very quickly which makes you feel tired. In this case you want to feel that buzz feeling again. This is the feeling that makes you smoke another cigarette. Your body has a property to build up a high tolerance for the nicotine which means that you will smoke more and more cigarettes because you want to prevent the withdrawal symptoms and to get nicotine’s pleasurable effects. This is a cycle in which you have ups and downs. In this way you start with your smoking addiction. This addiction gets in your body and even when you try to quit smoking you feel that you need to light up just one cigarette. For some people this is a serious problem, but other people can quit of smoking in a very short time. Some people need more than one try to stop smoking. There are many studies in which is shown that teens and children are very sensitive to nicotine which can make them addicted to cigarettes very easily. As someone starts with the smoking in its early ages, then it becomes addicted to smoking. Also there was a study in which was shown that 3 in 4 high school smokers have become smoking addicts in their adulthood. 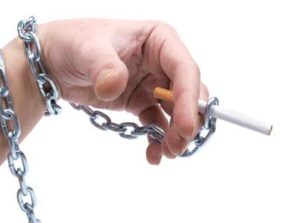 You should know the reasons why you have started smoking and why you smoke now. This will help you to make a plan how to quit from this bad habit.

Why are cigarettes addictive? Cigarettes makers know that nicotine is addiction which can sell their products. In the last period we have noticed that cigarettes have more nicotine than before. Also these companies are using some additives and chemicals which are making the people addictive to cigarettes. When you start to quit cigarettes, then you can feel many symptoms such as nicotine cravings, irritability, fatigue and headaches. In this world the number of people who have died is increasing compared with the number of people who have died of traffic accidents, firearms, infectious diseases, substance abuse and the obesity. You should quit smoking because smoking addiction can trigger respiratory problems, increase the risk of lung cancer, can make you get diabetes type 2, can cause you low fertility etc.

These are some conditions of the Smoking addiction