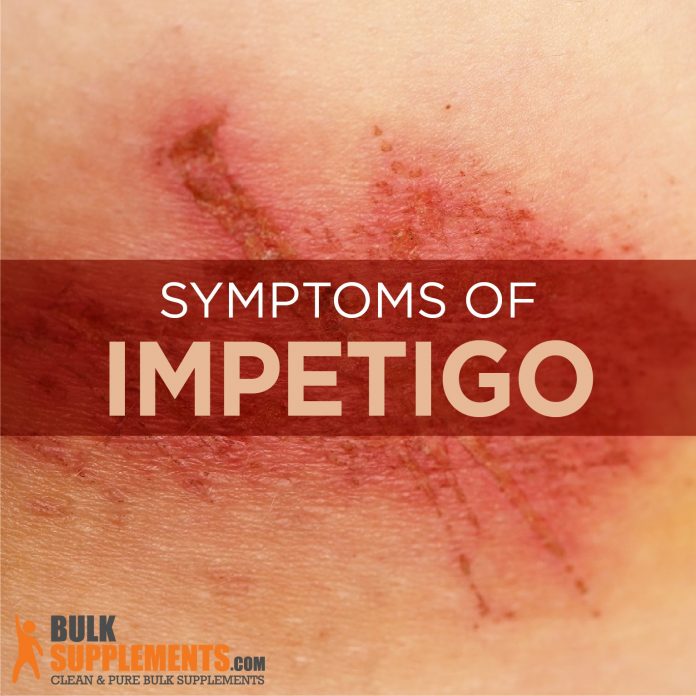 Impetigo is a very common and highly contagious skin infection which mainly affects children and infants. This usually appearing as red sore on their faces, especially around their nose and mouth and on hands and feet. These sores burst and they develop honey – colored crusts. In the most cases the treatment with antibiotics is recommended by doctors because this can help in the prevention of spread of impetigo to other people. It is very important to keep your children at home from day care or school until they are no longer contagious and this usually lasts 24 hours after you begin antibiotic treatment. It is known fact that children who wear diapers are prone to get impetigo. The outlook for this infection is good and this condition usually goes away within 2 – 3 weeks.

Symptoms of this condition can be uncomfortable. The general signs and symptoms of this condition include red sores which quickly rupture, ooze for a few days and then they form a yellowish – brown crust. The sores are usually happening around the mouth and nose and they can be spread to other areas of the body by towels, clothing and fingers. Soreness and itching are generally mild. Also there is a less common form of impetigo which is called bullous impetigo and it may feature larger blisters which happen on the trunk on young children and infants. Also there is a more serious form of impetigo which is called ecthyma. This form penetrates deeper into the skin which is causing painful fluid or pus filled sores that turn into deep ulcers. If you think that you or your children have impetigo, then you must talk with your doctor, dermatologist or your child’s pediatrician. Here are the most common symptoms:

We are exposed to bacteria which are causing impetigo when we come in contact with the sores of someone who is infected or we come in contact with some items they have touched such as towels, bed linen, clothing and even toys. Impetigo is caused by skin infection with one of 2 types of bacteria – Staphylococcus aureus and Streptococcus pyogenes. Also, the infection can happen in a few different ways, such as from:

Risk factors: Here are the risk factors which can increase your risk of impetigo:

Adults and people who have weakened immune system or diabetes have increased chances to develop ecthyma.

Complications: This condition typically is not dangerous. Also the sores in mild forms of the infection generally heal without scarring. There are rare cases when complications of impetigo include: