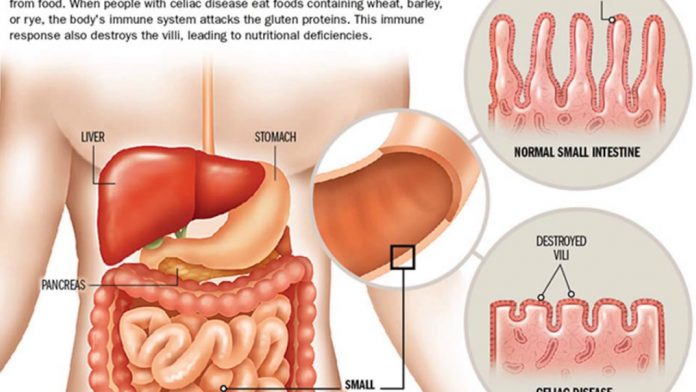 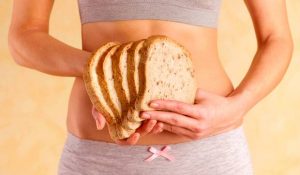 Here are some of the signs and symptoms of gluten intolerance:

Skin problems: This condition can affect your skin. The manifestation of celiac disease is the blistering skin condition which is called dermatitis herpetiformis. Every single person who suffers from this disease is sensitive to gluten but less than 10% of people diagnosed with this disease experience digestive symptoms which indicated celiac disease. There are other several skin diseases which have shown improvement while on a gluten – free diet and they include: Chronic urticaria (this is a skin condition which is characterized by recurrent, itchy, pink or red lesions with pale centers); Alopecia areata (this is an autoimmune disease which appears as non – scarring hair loss) and Psoriasis (this is an inflammatory disease of the skin which is characterized by scaling and reddening of the skin). [3]

Bloating: This is one of the most common symptoms of gluten intolerance. Bloating is involving belly feeling swollen after eating [4].

Feeling tired: This is a very common symptom and usually it is not linked to any disease. But if you are constantly feeling tired, then you should visit your doctor to discover if you have some underlying cause for it. People who are gluten intolerant are very prone to tiredness and fatigue, especially after they have eaten foods that have gluten. There are some studies in which are shown that 60 – 82% of people who are gluten intolerant are commonly experiencing fatigue and tiredness. The gluten intolerance can cause iron – deficiency anemia which in turn will cause lack of energy and more tiredness [5].

Headaches: There are many people who experience migraines or headaches once in a while. Migraines are very common condition. There are some studies in which are said that 10 – 12% of the Western population is experiencing migraines regularly [6]. Also in studies are said that people who suffer from gluten intolerance are more prone to migraines compared to others. If you have regular migraines or headaches without any apparent cause, then you could be sensitive to gluten.

Diarrhea, constipation and smelly feces: When we get occasional constipation and diarrhea, then it is normal but if it is happening regularly, then it is a reason for concern. These conditions are very common symptoms of gluten intolerance. People who suffer from celiac disease are experiencing inflammation in the gut after they have eaten gluten. This is damaging their gut lining and it is leading to poor nutrition absorption and this is resulting in frequent diarrhea or constipation or significant digestive discomfort. But there are some cases when people do not have celiac disease and they have digestive symptoms that are caused by the gluten. There are, more than 50% of gluten – sensitive individuals which are regularly experiencing diarrhea while about 25% are experiencing constipation. Also people who have celiac disease can experience pale and foul – smelling feces due to poor nutrient absorption. When there is a frequent diarrhea, then it can cause some major health concerns, such as fatigue, dehydration and electrolytes.

[7] Micu A. What is gluten intolerance, and what are its symptoms? ZME Science. 2019. Retrieved from www.zmescience.com/science/gluten-intolerance-feature/