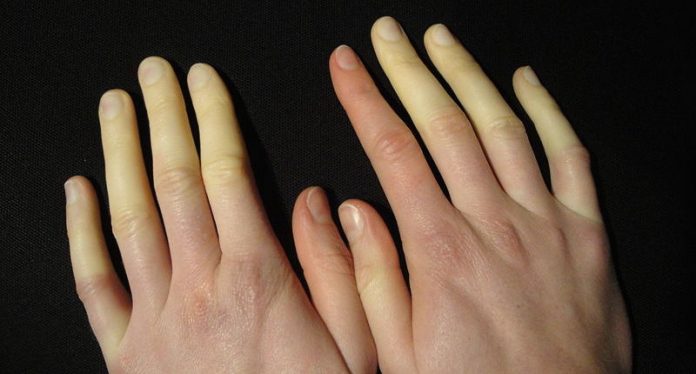 Symptoms: Here are signs and symptoms of Raynaud’s disease [3]:

When someone is having attack of Raynaud’s disease, the affected areas of the skin usually first turn white. Then, the affected area of skin turns blue and feels numb and cold. As the circulation improves and you warm, the affected areas may turn red, swell, tingle or throb. This condition is most commonly affecting the fingers and toes but also it can affect other parts of your body, such as ears, lips, nose and even nipples. After you are warm, it can take fifteen minutes for the normal blood flow to return to the area. It is known that if you have a history of severe Raynaud’s disease and you develop a sore or infection in one of your affected fingers or toes, then you need to talk with your doctor. 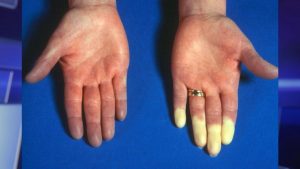 Causes: You should known it is not 100% understood the cause of Raynaud’s disease by doctors but the blood vessels in the feet and hands appear to overreact to stress or cold temperatures [4].

Blood vessels in spasm: When you have Raynaud’s disease, then arteries to your toes and fingers go into vasospasm when they are exposed to stress or cold, narrowing the vessels and temporarily limiting the blood supply. As time passes, these small arteries can thicken slightly and further liming blood flow. The cold temperatures are having highest chances to trigger an attack. It is known that the exposure to cold, such as putting your hands in cold water, being in cold air or taking something from a freezer, is the most likely to trigger. It is known fact that there are some cases when emotional stress can trigger an episode. [4]

Primary vs. secondary Raynaud’s: It is known that there are two main types of this condition.