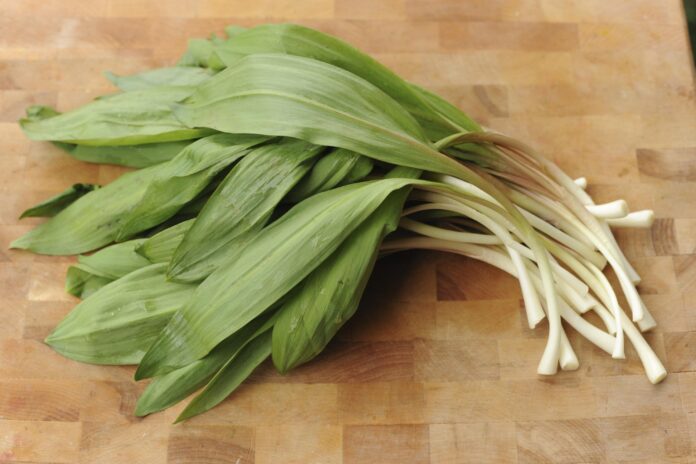 The scientific name of the ramp is Allium tricoccum. Its origin is from North America. Particularly, it is found in eastern Canada and the northern and southeastern United States. The color of the ramp is green when it is young and it turns black when mature. The taste of the ramp is delicious, sweet, and pungent. The shape of the ramp is three – celled seed capsule. The ramp belongs to the Liliaceae family. In history, a ramp was considered as a spring tonic and early settlers relied on their restorative qualities after a long winter. The plant size of the ramp is from twenty to thirty centimeters.

The propagation of the ramp is by seed. The flowering season of the ramp is from late June to July. In traditional medicine, the leaves of the ramp were used in the treatment of colds and croup, as well as a spring tonic. The warm juice of leaves and bulb was used externally in the treatment of earaches. You can consume the bulb of the ramp in raw or cooked form. Mainly, a ramp is used as a flavoring agent in salads and savory dishes. The ramps are eaten with potatoes or scrambled eggs. Also, ramps are used in the preparation of soups and many other savories. 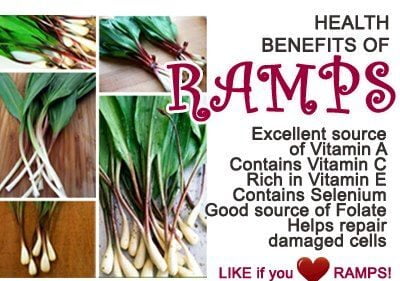 Here are some health benefits of a ramp:

The ramp is rich in TPC (total polyphenol content), which are considered powerful antioxidant agents. In many studies are shown that ramps have higher antioxidant content compared to red bell peppers and tomatoes. The mentioned antioxidant agents in ramp are powerful in the fight against cancer.

The ramp has high amounts of folate, which is very important B vitamin. It keeps our bodies levels of homocysteine in check. Homocysteine is a protein which is found in the blood and it contributes to atherosclerosis when it is in high amounts.

The ramp has choline, which is used as a chemical messenger in the brain (also known as neurotransmitter). It has been shown that the sufficient amounts of choline in the diet can support the proper cognitive function and they can facilitate learning in adults and children.

In one ramp there is 10% of your RDA of iron for women on a daily basis. Iron has many important functions in our bodies. It can increase the energy levels, support the healthy immune function and it transports the oxygen to the cells. It is very important for women to have iron replacement, because they experience loss of iron during their menstrual cycle.

The ramp has the ability to fight or prevent cancer due to its high antioxidant content. In some studies are shown that the flavonoid antioxidant kaempferol which is found in ramp is involved in apoptosis, which is known as cell death, in many different types of cancer. In one study done in 2000 was recommended to eat selenium – rich foods to reduce chances of getting cancer in people. One of these foods is ramp, so add it in your diet.

Native Americans believed for centuries that ramps have benefits for heart, as well as for the circulatory system. The ramp has folatile which can help to control the homocysteine levels of the body. When the protein homocysteine is in high levels in the body, then it can lead to heart diseases, such as atherosclerosis.

In some studies are found that the kaempferol found in the ramp can help to decrease the risk of cardiovascular diseases. Also, this element protects the blood vessels against damage and it can support the liver with elimination of cholesterol. Also, the ramp can help to reduce the low density lipoprotein and total cholesterol and this is very essential for preventing heart disease and atherosclerosis.

The ramp is nutrient – dense, which means that is low in calories, but it is high in vitamins and minerals. It is rich in Vitamin A, Vitamin K1, Vitamin C and manganese. Also, it has small amounts of folate, iron, Vitamin B6 and copper. All of these nutrients play important roles in the body, so it is worth adding ramp in your diet.