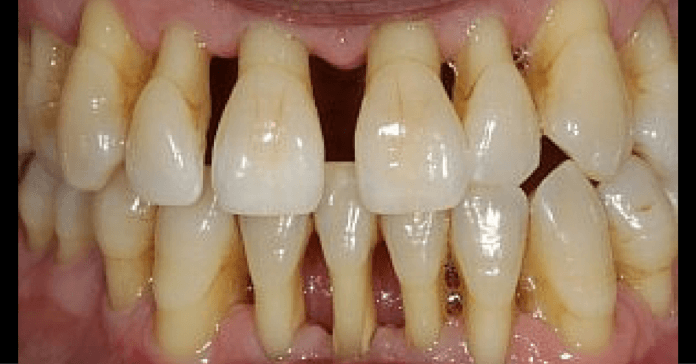 Receding gums are also known as gingival recession. This is a retraction of the gums from the crown of the teeth. This is a progressive condition which can start as early as in childhood or adolescence and it worsens ever so gradually over the years. As the time passes by, this condition becomes apparent which is usually happening after the age of 40 and the roots of your teeth may have become exposed. There are many causes which can lead to receding gums such as hormonal changes, your genes, periodontal diseases, insufficient dental care, aggressive tooth brushing, tobacco products, crooked teeth or a misaligned bite, grinding and clenching your teeth and body piercing of the lip or tongue [1]. This is a very common dental problem. There are many people who do not know that they have receding gums because this condition is happening gradually. You should know that the first sign of receding gums is tooth sensitivity or you can notice that a tooth looks longer than normal. Also you can feel a notch near your gum line. This is not a problem which you should ignore. If you think that you have receding gums, then you should visit your doctor as soon as possible. There are many treatments which can repair the gum and they can prevent further damage. You need to talk with your doctor if you suffer from receding gums before you start using some of the below mentioned home remedies.

Omega – 3 fatty acids: There was one study in which people were taking 300 milligrams of Omega – 3 fatty acids on daily basis in a period of 12 weeks and these people have said that they have reduction in gingival index, pocket depth and bleeding while at the same time there was improvement in gum to tooth attachment [2]. Also there are many doctors who believe that Omega – 3 fatty acids can help to prevent chronic periodontitis in some people.

Mouthwash: You should use a mouthwash made from oregano oil because this is one of the best home remedies for the receding gums. This home remedy has strong anti – parasite, antiviral, antioxidant, antibacterial and anti – fungal compounds which can promote healing of inflamed gums while at the same time it will fight against the infection.

Flossing: It is known fact that anything you can do to reduce the plaque and bacteria can help you when you fight against gum disease. The benefits of flossing are not superior to oil pulling but if you want to floss, then you need to floss smarter. You should choose your floss carefully. Also you should select all – natural floss which does not have PFOA or other nonstick compounds.

Amla: In the Ayurvedic medicine the amla is often described as natural treatment for receding gums. It can help to rebuild the oral health. There are some studies in which are said that amla can support the healing and development of connective tissue. You can use the amla as a mouth rinse or you can take it orally in a capsule form for long – term dental health. [3] 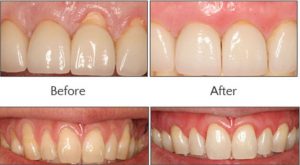 Yarrow: Yarrow is also called nosebleed or soldier’s woundwort because the juice of its stem and leaves can stop the bleeding. There are many North American tribes which chew the yarrow leaves as a natural cure for a toothache as well as many other ailments [4]. Yarrow is possessing analgesic, anti – inflammatory and anticoagulant properties which can help with receding gums at any stage. If you have access to fresh supply of yarrow, then you should chew on leaves and stems. You should pound the leaves or you should grind them into a paste and then you should use it for gum massage. Also you can make a yarrow tea for gargling. You should pour boiling water over a handful of dried or fresh yarrow flowers and leaves or over one to two tablespoons of dry herb. Let this home remedy to steep for fifteen to twenty minutes. You should strain it and use this tea when it has cooled down. This is antiseptic tea which can help to improve the oral hygiene in general and it can be used as a natural remedy for many different problems, including throat infections and gum disease. If you do not want to use this herb, then you can use yarrow essential oil. This is blue colored which is very potent. You should mix in a few drops of coconut oil or any other carrier oil before you start using it as your natural treatment for receding gums.

Septilin: This is Ayurvedic medicine which can boost the immunity and it can fight against different kinds of infections. This is a proprietary blend of licorice, amla, Guduchi, Guggulu and other compounds which reduce inflammation and support a healthy immune system. There was a double – blind, placebo – controlled clinical trial in which was said that the dietary supplementation with Septilin can improve the periodontal treatment outcomes. In a period of 3 weeks, participants who were using the septilin have noticed improvement in the trial scores. [5]

Aloe Vera: There are some studies in India in which are studies the efficacy of Aloe Vera in oral health. In one study, scientists were using Aloe Vera – based supplement, juice, sprays, topical, gels, mouthwashes and toothpastes. In this study was found that when Aloe Vera gel is applied to inflamed gums and pockets, then this is resulting in improvement in periodontal conditions. Also when 100 milligrams of Aloe Vera supplements, in addition to rubbing the gel on the gums, can help to speed up the healing when gums are receding. [6]

Vitamin C: It is known fact that when someone has a Vitamin C deficiency, then this can cause inflamed and bleeding gums. You should boost your intake of Vitamin C – rich foods such as Brussels sprouts, broccoli, red peppers, kale and oranges because it can help to reduce the inflammation and bleeding which are associated with receding gums.

Sumac: It is known that sumac can help you in the natural treatment of receding gums. It has tannins which leave a puckering taste and a dry, sandpapery feel in the mouth characteristic of astringency. They restore gum tightness, reduce inflammation and draw out fluids from tissues. You should remove the outer skin from sumac twigs and you should use for massaging the gums or you can crush their tips and use them to brush the gums and teeth. Also you can boil the leaves to make a sumac tea for gargling or you can make the red berries intro refreshing Indian lemonade. Sumac berries are rich in vitamins. You can use the dried and coarsely powdered berries as a spice. [7]

Coconut oil and Himalayan sea salt rub: If you want to reduce the inflammation in your gums, then you should gently massage your gums with a mixture of coconut oil and pink Himalayan salt. You should let it stay there for a couple of minutes and then rinse your mouth using fresh water. When these natural cures are mixed together, then they have powerful anti – inflammatory and antimicrobial properties which can help you to get a relief from the symptoms when you have receding gums.

Sage: If you suffer from receding gums, then you can use sage tea as your natural treatment. It has excellent anti – inflammatory and antimicrobial properties which are a reason why this tea is used for dental problems. There are many people who chew the sage leaves as a natural treatment for dental abscesses and swollen gums. You should steep a handful of fresh sage leaves or two tablespoons of dried herb in hot water for fifteen to twenty minutes and then strain out the liquid. You can use the leftover slush for massaging the gums.

Oil pulling: This is Ayurvedic practice which is involving the swishing of either coconut oil or sesame oil in the mouth for ten to twenty minutes a day. There are some studies in which are said that oil pulling can help to remove the toxins from mouth and also it can help to prevent cavities and oral diseases. The oil pulling is very effective as a germicidal mouthwash at eliminating bad breath which is a common side effect of receding gums and gum disease. [8]

Green tea: Green tea has age – fighting compounds which can help to promote healthy teeth and gums. There was one study in which was found that when you are drinking one cup of green tea on daily basis, can help to decrease the periodontal pocket depth, reduce gum bleeding and improve the attachment of the gums to the teeth. It is known that the more cups of green tea are consumed, the better results you will have. [9]

[1] Shariff JA, Ahluwalia KP, Papapanou PN. Relationship between frequent recreational cannabis (marijuana and hashish) use and periodontitis in adults in the United States: National Health and Nutrition Examination Survey 2011 to 2012. Journal of Periodontology. 2017;88(3):273-280.