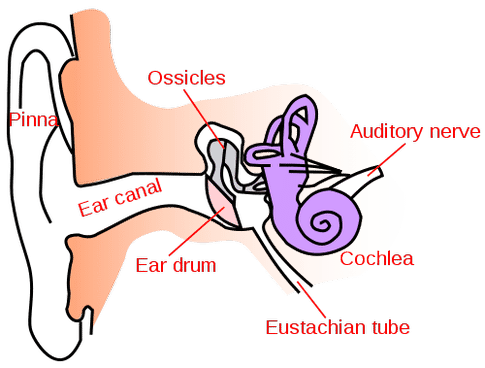 Blocked ears are also known as earwax blockage. When your earwax is becoming hard and you cannot wash it on natural way or when earwax is accumulated in your ear, then it is happening the condition which is known as blocked ears. Earwax is natural part of your body. It is very helpful because this part of your body is protecting your body from any kind of disease. It is protecting, cleaning and lubricating your ear canal because it has ability to slow down the growth of bacteria and also to trap the dirt which is accumulated in your inner body. But when your earwax is blocked, then you should visit your doctor. You can also resolve this problem without need of doctor’s help, but is recommended to visit your doctor because ears are one of the most sensitive parts of your body. [1]

Signs and symptoms of blocked ears

Here are some signs and symptoms of the blocked ears [2]: When you are not treating this condition, then it can be a reason for serious infections. If you have some symptoms of this infection, then you must visit your doctor to try some of our natural cures. Here are the symptoms which are leading to blocked ears:

All of the mentioned symptoms are the part of signs and symptoms of blocked ears plus:

If the mentioned symptoms are constant and you are feeling them every day, then you should not doubt it to make an appointment with your doctor.

Earwax in children: Not just adults, but also children are producing earwax in natural way. It is recommended to remove the wax from their ears. But also their parents should be careful because while they are trying to remove blocked ears, they can also make them serious damages. When you are removing the wax of their ears and you are suspecting that their ears are blocked, then you must see pediatrician. If their doctor sees extra earwax in their ears when they are making normal tests for their ears, then they will remove the extra wax. If you have noticed your child that is putting some objects in their ears or they are putting their fingers in their ears, then you should also visit their doctor. Then, you will know if their ears are blocked or not.

Earwax in older adults: Earwax is also normal for older adults, but sometimes this natural part of their body, can lead to blocked ears. There are many cases in which older adults are not removing the wax. They are living it to buildup until the point when they are starting to lose their hearing. Also this is one of the biggest causes for blocked ears in older people. When they are hearing sounds, then they are hearing like their sounds are muffled. Also hearing aid can be a reason for earwax in older adults. If you have older parent, then you should not doubt to visit his or her doctor because they are most suffering from this condition. [3]

Causes for blocked ears: Glands in your skin which are lining the outer half of your ear canals is secreting earwax. The earwax and the tiny hairs which are in your eras are trapping the dust and other particles which are damaging the deep structures in your ears (here we can mention the eardrum). A small amount of your earwax is making the way to the open of your ear. When the earwax is in the opening of your ears, then it is removed when you are washing your ears or when another wax which has replaced the older wax. But if your ears are secreting too much wax or if you are not washing the earwax, then this wax is building up in your ears and it is blocking your canal. Also when people are trying to use cotton swabs to clean their ears, then they can also damage their ears. In many cases this method is not cleaning the ears, but it is putting it deep in the ear. You should be careful with the cotton swabs if you have noticed that your ears are blocked. Also you should not put any object in your blocked ears because your wax will be pushed back and also you can make a serious injury of your ears. [4,5]

[1] Goldman JG. The mysterious properties of the wax in your ear. BBC. 2016. Retrieved from www.bbc.com/future/article/20160429-the-mysterious-properties-of-the-wax-in-your-ear