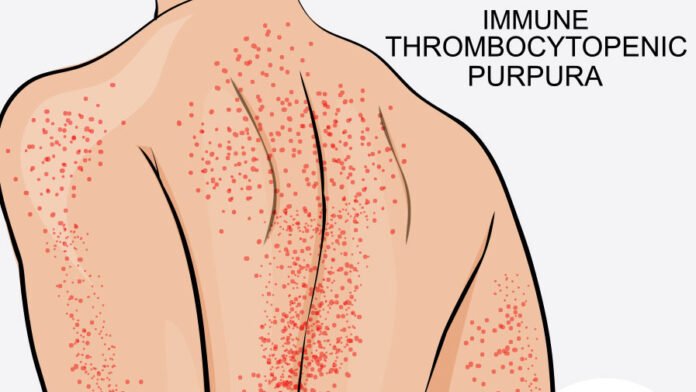 ITP is a shortcut for immune thrombocytopenia. It is a disorder that can lead to easy or excessive bruising and bleeding. This bleeding is a result of unusually low levels of platelets. These are cells that help blood clot. ITP was formerly known as idiopathic thrombocytopenic purpura. It can cause purple bruises, as well as tiny reddish-purple dots which look like a rash. Children can develop ITP after a viral infection and usually, they recover fully without treatment. In adults, the ITP is often long – term condition.

If you do not have signs of bleeding and your platelet count is not too low, then you may not need any treatment. But, if your symptoms are more severe, then the treatment may include medications to boost your platelet count or surgery to remove your spleen. To diagnose the ITP, your doctor will try to exclude other possible causes of bleeding and a low platelet count, such as medications that you or your children take or some underlying illness. Blood tests can help to check the levels of platelets. In rare cases, adults might need a bone marrow exam to rule out other problems.

The ITP may have no signs and symptoms. When they happen, they may include:

If you or your child develop warning signs that worry you, then you need to talk with your doctor. Bleeding that it not stopped is a medical emergency. You need to seek immediate help if you or your child experiences bleeding that cannot be controlled by the usual first–aid techniques, such as applying pressure to the area. People, who have mild ITP, may need nothing more than regular monitoring and platelet checks. Usually, children improve without treatment.

Most adults who suffer from ITP, eventually need treatment, as this condition often becomes severe or long–term. Treatment can include many approaches, such as medications to boost the platelet count or surgery to remove the spleen. You need to talk with your doctor about the risks and benefits of your treatment options. Some people have found out that the side effects of treatment are more burdensome compared to the disease itself. The low platelet count may not cause symptoms, so this problem is often discovered when some people have a blood test for another reason.

To diagnose the ITP, your doctor will make blood tests that require drawing a small amount of blood from a vein in an arm. Also, your doctor may refer you to a specialist in blood diseases. You should list all the symptoms that you are experiencing, including those that seem unrelated to the reason for which you scheduled the appointment. Also, list key personal information, such as medical procedures, recent illnesses, life changes, and major stresses. If you take some medications or vitamins, tell them to your doctor.

Usually, the ITP happens when the immune system mistakenly attacks and destroys platelets, which are cell fragments that can help blood clot. In adults, this can be triggered by an infection with H. pylori (it is a type of bacteria that causes stomach ulcers), hepatitis, or HIV. In most children, when they have ITP, it usually follows a viral illness, such as the flu or the mumps.

It is noticed that ITP is more common among young women. The risk of getting ITP is higher in people who have diseases, such as antiphospholipid syndrome, lupus, and rheumatoid arthritis.

One rare complication of ITP is bleeding into the brain and this can be fatal for the affected person. If you are pregnant and your platelet count is very low or if you are bleeding, then you have an increased risk of heavy bleeding during delivery. Your doctor may suggest treatment to maintain a stable platelet count, taking into accounts the effects on your baby.