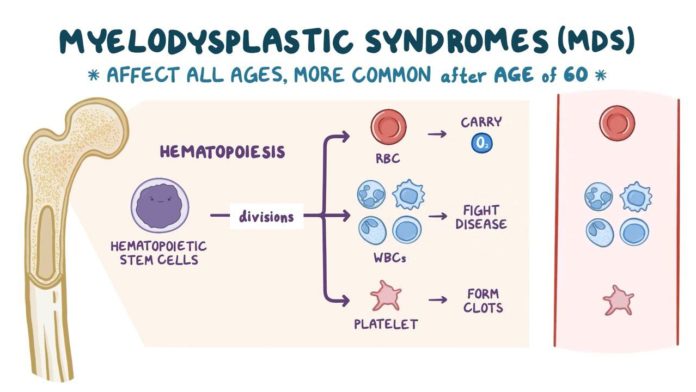 The treatment which is used for myelodysplastic syndromes is usually focusing on reducing and preventing complications of the disease and its treatments. Also, there are some cases when it can involve a bone marrow transplant or chemotherapy.

If you have some signs and symptoms that worry you, then you need to talk with your doctor.

The bone marrow in a healthy person makes new and immature blood cells which mature over time. The myelodysplastic syndromes happen when something disrupts this process so the blood cells cannot mature. Blood cells do not develop normally. Instead, they die in the bone marrow or just after entering the bloodstream.

The myelodysplastic syndromes are divided into subtypes which is based on the type of blood cells (red cells, white cells and platelets) which are involved. Here are subtypes of this syndromes

Myelodysplastic syndrome, unclassifiable: This is uncommon syndrome. In this type, there are reduced numbers of one of the three types of mature blood cells and they can be platelets or white blood cells that look abnormal under a microscope.

Myelodysplastic syndrome with excess blasts – types 1 and 2: In these types, any of the three types of blood cells, can be low and they can appear abnormal under a microscope. Very immature blood cells are found in the bone marrow and blood.

Myelodysplastic syndrome associated with isolated del chromosome abnormality: Those people who have this type of this syndrome, have low numbers of red blood cells and the cells have a specific mutation in their DNA.

Myelodysplastic syndrome with ring sideroblasts: This type has two subtypes which are involving a low number of one or more blood cell types. This type has one characteristic and that is the existing red blood cells in the bone marrow have a ring of excess iron called sideroblasts.

Myelodysplastic syndrome with multilineage dysplasia: When someone has this type of this syndrome, then 2 or 3 blood cell types are abnormal.

Myelodysplastic syndrome with unilineage dysplasia: One blood cell type is low in number and it appears abnormal under the microscope.

Cluster headaches is type of headache belongs to the Primary headache classification and this is one of the most severe forms of headaches. This...
Read more

This type of oil is pressed from the seeds of grapes. This oil is a by – product of the winemaking. The grapeseed oil...
Read more

Health benefits of figs are such as to help you to gain weight in a quick and healthy way after you have been suffering...
Read more

From the botanical point of view, the squash is a vegetable but they are generally considered as fruits because they have the seeds of...
Read more

Health benefits of leeks – strengthen your gut, stomach and kidneys

Leeks are very popular home remedy for many different ailments. They are inexpensive, plentiful and highly nourishing. They can be used in different forms,...
Read more

Baby corn is used extensively in the Asian and oriental cooking. It is thought that is one of the healthiest vegetables which you can...
Read more