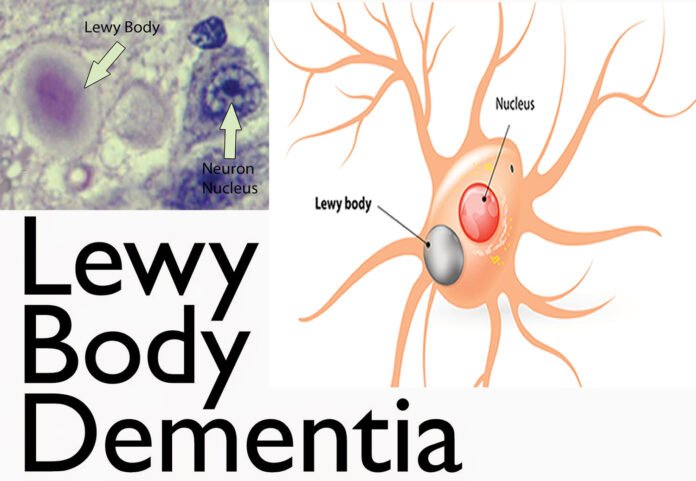 This is the second most common type of progressive dementia after Alzheimer’s disease dementia. It leads to a decline in thinking, reasoning, and independent function of abnormal microscopic deposits that can damage brain cells over time. Dementia with Lewy bodies is also found in other brain disorders, such as Parkinson’s disease dementia, and Alzheimer’s dementia.

The most common symptoms of dementia with Lewy bodies include delusions; well-formed visual hallucinations; slowness, gait imbalance, and other parkinsonian movement features; confusion and alertness that varies significantly from one time of day to another or from one day to the next; changes in thinking and reasoning; memory loss that may be significant but less prominent than in Alzheimer’s disease; malfunctions of the automatic nervous system; sleep disturbances and trouble interrupting visual information. REM sleep disorder is more common in dementia with Lewy bodies compared to Alzheimer’s disease.

Music therapy is involving listening to soothing music and it can help you to be relaxed from all your minds.

It is noticed that behavioral issues can worsen at night. You should create calming bedtime rituals without the distraction of television, meal cleanup, and active family members. You should leave the night lights on to prevent disorientation.

You can participate in games, crossword puzzles, and other activities which involve using thinking skills. This may help to slow mental decline in people who suffer from dementia with Lewy bodies.

There can be different benefits of exercise, including improvements in physical function, behavior, and depression symptoms. In some studies are shown that exercise can slow cognitive decline in people with dementia. Also, working on general physical fitness is very helpful. Regular exercise will boost the mood, improve physical health and it will reduce aches and pains. All of the mentioned factors are contributing to reducing negative behavior.

You should maintain eye contact and speak slowly in simple sentences and do not rush the response. You should present only one idea or instruction at a time. You can use cues and gestures, such as pointing to objects.

You need to limit the caffeine during the day because this can make your night sleep badly.

This type of therapy is involving the use of animals to improve moods and behaviors in people who suffer from dementia with Lewy bodies.

In some studies is said that the extract of ginkgo Biloba leaf can help in the natural treatment of dementia with Lewy bodies. Talk with your doctor about the recommended dosage for this natural treatment for your disease.

The emotional and physical demands of caregiving can be exhausting. You may experience social isolation, grief, worry, discouragement, guilt, and anger. You can ask your friends or other family members for help when you need it. You can consider in-home health services to help you care for a person with dementia with Lewy bodies. You need to exercise on daily basis and eat a healthy diet. You need to learn as much about the disease as you can.

You can ask your doctor questions, social workers, and others on the care team. You can also join a support group. Many people who suffer from dementia with Lewy bodies and their families can benefit from counseling or local support groups. You should your local agencies on health or aging to get connected with support groups, doctors, resources, referrals, home care agencies, supervised living facilities and a telephone helpline, and educational seminars.

This home remedy is widely used to treat dementia-like symptoms in many Asian countries. In some studies is said that it can help in the natural treatment of dementia with Lewy bodies, but ask your doctor first before you use it as your home remedy, so in this way, you will avoid side effects.

People who suffer from dementia with Lewy bodies often experience a mixture of emotions, such as depression, grief, uncertainty, fear, anger, frustration, and confusion. You can offer your support by doing your best to help the person retain dignity and self–respect, being positive, reassuring the person that he or she still can enjoy life, or listening. If you are a caregiver for someone with dementia with Lewy bodies, then watch the person closely to make sure that he or she does not fall, react negatively to medications or lose consciousness. You should provide reassurance during times of hallucinations, delusions or confusion.

You can take a massage if you suffer from dementia with Lewy bodies because it will help you to feel better and relaxed. It can help to loosen stiff muscles, improve circulation and promote the relaxation.

This type of therapy is using fragrant plant oils, so you can try it as your natural treatment for dementia with Lewy bodies. It can boost your mood and it will promote relaxation.

You should make daily routines and break tasks into easier steps. You should focus on successes, not failures. The routine and structure during the day can be less confusing.

The caregiver’s response may worsen the behavior of people who suffer from dementia with Lewy bodies. You should avoid correcting and quizzing a person with dementia. You should offer reassurance and validation of his or her concerns.

When you reduce the clutter and distracting noise, then this can make it easier for someone with dementia with Lewy bodies to function.

In many cases, a person who suffers from dementia with Lewy bodies is not distressed by the hallucinations. In these cases, the side effects of medications can be worse than hallucinations themselves.

This type of therapy can help people who suffer from dementia with Lewy bodies to maintain skills and improve confidence and independence.

Art therapy can help to reduce anxiety, improve the mood and give you a sense of accomplishment.

If dementia with Lewy bodies is causing problems with swallowing, then this will interfere with nutrition and cause hunger. This is not good for someone’s health or mood. It is natural to be angry when we are too hungry. If this is happening with you, then you can consider taking speech therapy. The speech therapist will teach you techniques that will make you to swallow easier and safer. Also, they can make recommendations on the types and consistency of foods and drinks that can help with swallowing.

Crowds, noise, and cutters can contribute to hallucinations and delusions which typically trigger behavioral challenges. You need to reduce the clutter and minimize distracting activity, people, or noise. This can make people suffering from dementia with Lewy bodies function better and it will reduce their anxiety. Also, it will reduce the chance that their eyes will play tricks on them and cause them to become confused or upset about what they think they are seeing.

In some cases, the worsening of symptoms or new behavioral symptoms could be caused by physical pain or discomfort that the person is not able to verbally express or describe. The most common physical issues include constipation, bedsores, urinary tract infection, fever, injury, and arthritis. Also, in some cases, simple causes, like being hungry, needing to pee, or being tired can trigger negative behavior. When the physical pain is well treated, then the negative behavioral symptoms will decrease.