The fulvic acid is a component of the humus. Humus is made from many organic compounds which are found in the Earth’s soils, bodies of water, and rock sediments. The fulvic acid is created by the gradual decomposition of certain plants and animals by the action of microorganisms. In the past decades, doctors are learning more about how fulvic acid found in dirt can actually improve human get health and immune functions.

Nowadays, people supplement with fulvic acid, as well as soil-based probiotics, to replenish what is being lost in their diets and lifestyles due to modern farming techniques. Fulvic acid is a yellow-brown substance that is found in natural materials. It has a plethora of nutrients and active compounds that can help improve health. It has been shown that fulvic minerals have multiple active functional groups, including alkoxyl, carboxyl, quinone carbonyl, ketone carbonyl, and phenolic hydroxyl groups.

The fulvic acid is yellow in color and it does not have a very appealing taste on its own. This is a reason why people choose to mix the fulvic acid powder into smoothies, juice, etc. The fulvic acid is much smaller than humic acid and it is sometimes referred to as a low molecular weight humic substance. The fulvic acids are smaller, which means that they can be easily absorbed by leaves, stems, and roots. You should talk with your doctor about the recommended dosage of taking fulvic acid.

Here are some health benefits of fulvic acid: 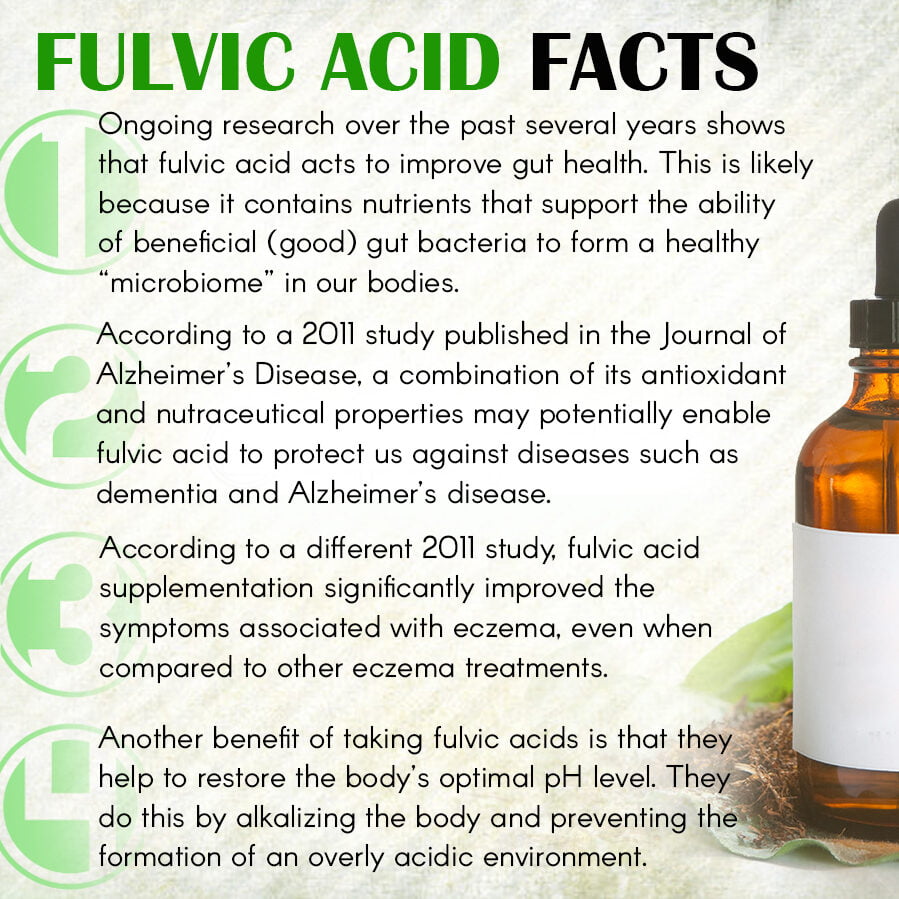 Repairs and protects the skin:

In some studies are shown that fulvic acid has antimicrobial properties which can help in the fight against harmful bacteria. It can help to protect your skin and it can treat wounds or irritations which are caused by rashes, scrapes, bug bites, and eczema associated with microbes or fungus. In one study was said that fulvic acid supplementation significantly improved the symptoms associated with eczema, even compared to other eczema treatments.

There are some people who say that fulvic acid can help in weight loss. But, there is not enough evidence to support this statement.

Many people who were taking fulvic acid supplementation have reported improvements in energy levels, probably due to lower levels of inflammation and free radical damage increased detoxification, and higher intakes of electrolytes and other key nutrients. The fulvic acid is useful in lowering chronic nerve pain, headaches, joint pain that is caused by arthritis, or muscle and bone pains that are associated with aging.

Also, there are some studies in which is said that fulvic acid electrolytes can help to reduce swelling, soothe and relax muscles, decrease inflammation and improve circulation. If you do not have electrolyte balance in your body, then this can cause symptoms to worsen.

It has been shown that fulvic acid has antioxidants that counter the effects of free radicals. Also, they help to detoxify the body of many toxins which contribute to the problem, such as heavy metals, radioactive waste, and chemicals used in agriculture. Also, it helps to extend the permeability and life of cells by providing electrolytes which have a lot of functions with the digestive tract, brain, muscles, and heart.

In some studies is said that fulvic acid has pharmacological properties which can help to defend against some types of cancer, including colorectal cancer.

The fulvic acid is beneficial for digestion. It is improving energy due to its detoxifying abilities. As a form of natural chelation therapy, fulvic acid is capable of binding and breaking down toxins and metals that enter the body through air pollution, household products, prescription medications, water, and food supply.

In some studies are shown that fulvic acid has ion-selective electrodes which can be used for attracting heavy metals, even for filtering soils and water. This is because they can help to bind things like iron and copper.